At our annual outdoor gathering on June 15, the Charlottesville Area Tree Stewards convened under the magnificent White Oak beside Earlysville Road on the grounds of the Charlottesville-Albemarle Airport. Recognized by CATS as a Landmark Tree, and estimated to be s 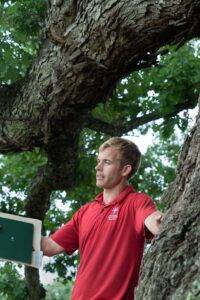 ome 300 years old, it is the second-largest White Oak (Quercus alba) in Virginia.

The event included remarks by Ann Mallek, a member of the Albemarle County Board of Supervisors and a strong voice for protecting the county’s rural areas and forest canopy, and Jake Van Yahres (at right), co-owner of Van Yahres Tree Company. Jake described the special care his company provides for this venerable tree and how it has managed to survive for so long. 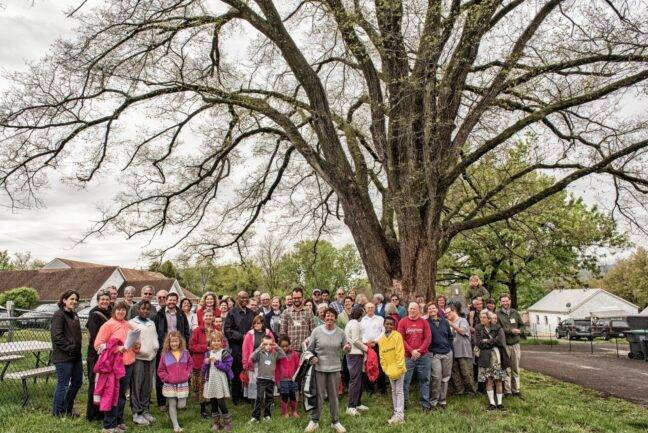 Charlottesville Area Tree Stewards, Charlottesville Tree Commission members, and officials from the Virginia Department of Forestry and the City of Charlottesville will join members of Sojourners Church for an Arbor Day celebration honoring the church’s newly designated Landmark Tree, a magnificent American Elm.

Meet at the trailhead kiosk to walk with the Tree Stewards and officials from Albemarle County and the County’s Parks and Recreation Department to the venerable Boundary Oak, also a newly designated Landmark Tree. This is an uphill, 20-minute walk on the Fire Trail to the intersection with the Little Yellow Mountain Trail. You will see many other large and beautiful trees along the way. 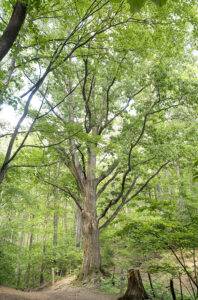 CATS volunteers are involved in a number of other Arbor Day events during the last week of April. These include activities with students at Clark Elementary School and a tree planting on the Clark campus with members of the Charlottesville Tree Commission. Also, the City Utilities Department will donate 250 trees to registered city residents. 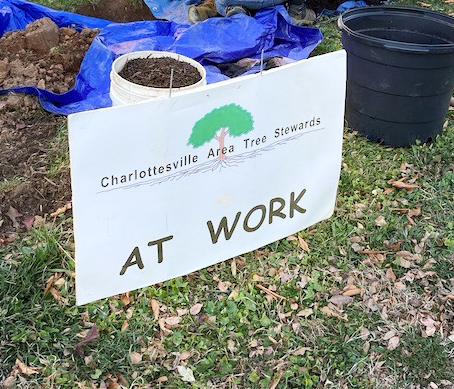 We all know the relief we feel when we walk from, say, a hot parking lot into a leafy landscape. Two things are happening: the trees are obviously sheltering us from the heat of the sun, but more subtly, they are also cooling the air around us as they release water vapor from their leaves, a process called transpiration.

Our friend Peggy Van Yahres, chair of the Charlottesville Tree Commission, will tell you that the cooling effect of the tree canopy does more than bring us comfort on a hot day. It saves lives.

“Scientists have documented that low-canopy neighborhoods have more heat- and pollution- related diseases, like heat strokes, heart attacks and asthma, than those neighborhoods with a lot of canopy,” she said. Plus, trees save energy. In the residential area with the lowest tree canopy in Charlottesville, it’s estimated that more than half the households spend at least 10 percent of their income on air conditioning, way above the average of 2 percent citywide.

These were among the key messages Van Yahres and fellow Tree Commissioner Brian Menard delivered to Charlottesville City Council earlier this year when they released the commission’s latest annual report on the state of the urban forest. The news was not good. Based on analysis of satellite imagery, the city lost 10 percent of its tree canopy between 2004 and 2018, dropping from 50 percent (the Tree Commission’s target) to 40 percent. Moreover, the rate of loss has been accelerating; the actual tree canopy may have dropped to 35 percent as of 2022, a loss of nearly 990 acres in less than two decades.

The commission recommended a range of measures to stem the loss of Charlottesville’s urban forest. These include moving closer to the city’s own goal of planting 200 trees a year on public land, a target it met only about halfway over the past five years. The commission also urges separate funding to address damage caused by the emerald ash borer, a pest expected to take out more than 300 of the city’s public trees. This problem threatens to divert as much as half of the city’s resources for preserving and maintaining the rest of its trees.

In addition, the commission calls for stronger tree protections in the city’s zoning ordinance, now being revised, to reduce the loss of urban forest to development. In her presentation to City Council, Van Yahres noted that Richmond requires developers to replace any public tree they remove or pay into a tree-replacement fund based on the assessed value of the lost tree.

“We want the city to value trees as an asset, as important as sidewalks, roads and other infrastructure,” she said.

Residential areas with less than 40 percent tree canopy are considered “unhealthy neighborhoods,” according to the commission’s report. Twelve of the city’s 19 neighborhoods now fall into this category. In two neighborhoods bordering West Main Street—10th and Page and the adjoining Starr Hill—the tree canopy is extremely low, under 20 percent.

The report makes clear that these low-canopy and extremely low-canopy areas “correlate closely with  historically and predominantly African-American neighborhoods, and with lower-income neighborhoods.” This means they suffer most from the higher utility costs and physical stress caused by what’s known as the urban heat island effect.

Urban heat islands are places where roofs, roads and other built structures absorb and re-emit heat from the sun, raising temperatures even at nighttime. In a recent study of this phenomenon in Richmond, Baltimore and Washington, D.C., volunteer researchers took more than 250,000 measurements with mobile devices and recorded wide swings in air temperatures—up to 18 degrees Fahrenheit—among various urban microclimates at the same time. According to the Science Museum of Virginia’s Jeremy Hoffman, who co-led the Richmond portion of the study, the presence of trees and other heat-reducing landscape features was the primary difference between cooler and warmer areas.

Tree Commissioner Van Yahres and her colleagues demonstrated this effect more simply in a presentation to students at Venable Elementary School. On a hot day last September, they measured the temperature on an unshaded playground. The reading: 102 degrees Fahrenheit. Just steps away, on a shaded portion of the school grounds, the reading was 82 degrees.

As the planet warms, it’s only going to get hotter in our urban areas. That’s why the city’s Tree Commission has joined forces with other community groups to form ReLeaf, a public-private partnership dedicated to protecting low-canopy neighborhoods from the heat impacts of climate change. Its partners include the Charlottesville Area Tree Stewards, the Virginia Chapter of The Nature Conservancy, Van Yahres Tree Company, and City of Promise, an organization that advances child and family development in the Starr Hill and 10th and Page neighborhoods.

ReLeaf’s principal objectives are to plant more trees, preserve existing trees, and educate the public—particularly children and teens—about the value of trees to our health and well-being. The initial focus is on the 10th and Page area.

“To grow the canopy in this neighborhood, we have to plant trees on private property because there is so little public greenspace where the city can add trees,” Van Yahres explained. ReLeaf aims to build on recent work by the Tree Stewards to provide and plant free trees for local residents. CATS volunteers, pictured below, have planted 29 trees in the neighborhood since last fall.

In Albemarle County’s growth areas, as trees fall to make way for new houses and townhomes, and as development brings in more heat-absorbing roofs, walls and pavement, expanding the urban forest will be essential to mitigating the heat island effect.

Under county code, developers of multifamily and townhome projects must include tree canopy ranging from 10 to 20 percent in their site plans, depending on the number of dwelling units per acre. However, the code requires no minimum canopy for projects comprising detached single-family houses. Although developers typically include street trees in these projects and often set aside greenspace in exchange for being allowed to build more houses on smaller lots, it’s largely up to the new homeowners to bring trees into these landscapes.

The county is preparing to overhaul its tree and landscape requirements, a process expected to get under way this summer, according to Charles Rapp, deputy director of Community Development. The current one-size-fits-all approach needs to be improved, he said, to allow greater flexibility to ensure that the right tree is planted in the right place—and that it survives. Too often, trees in new developments are dropped into compacted soil in narrow strips of land with little room for root growth, resulting in buckled sidewalks or trees that fail to thrive. Better standards will help build a more robust urban forest in the county.

Throughout our community, we can all make an impact by planting trees and by urging our leaders to do more to expand and preserve our canopy. Again, this is about more than beautification. As the climate heats up, the shade and cooling vapor from trees will be ever more vital to preserving our quality of life—and for some of the most vulnerable among us, perhaps even life itself.

CATS volunteers have been providing and planting free trees for residents of the 10th and Page neighborhood since last fall.