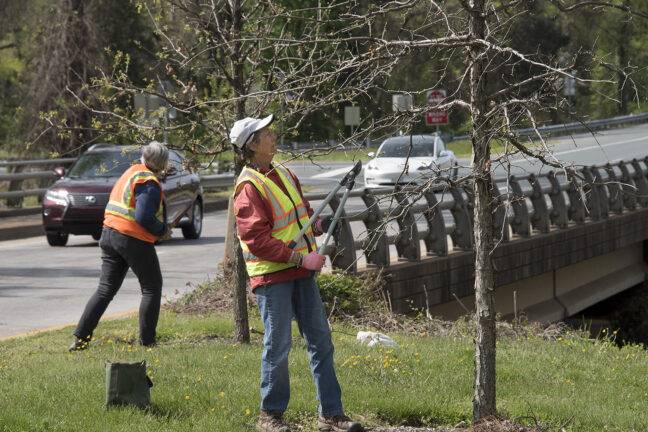 The Charlottesville Area Tree Stewards have taken advantage of the great spring weather and have pursued projects across the community.  In all of this work, our aim has been to improve both the health and the aesthetics of each site.

At Charlottesville’s Jackson-Via Elementary School, where we have been working for months to remove invasive vines and shrubs, we returned to the grounds on April 3 to plant trees in the places we have cleared. A few days later we were back at Jackson P. Burley Middle School on Rose Hill Drive to continue the removal of invasive vines and other vegetation that threaten trees on the campus, particularly along a creek adjacent to the school’s playing fields. The CATS team followed up with further work on April 26.

On April 23, our volunteers pruned trees that CATS had planted over the years for the Gateway Project, along the Route 20 entrance corridor into Charlottesville near the I-64 interchange. Later, on May 7, a small but valiant crew of CATS went back into Charlottesville’s Northeast Park to continue the removal of English ivy that is overwhelming the park’s trees.

May 9 found CATS at our tree nursery adjacent to the Virginia Department of Forestry, where we potted more than 200 one- and two-year-old trees for future sale to the public.  On May 19, CATS volunteers could be seen at the Ivy Creek Natural Area. Their mission: weed and mulch plantings our organization had put in place over the years around the Bird Viewing Area. On May 25, more weeding and mulching were in store for CATS working at Greenleaf Park, where we did some spring cleaning around beds of ferns we had placed there earlier.

Here’s a photo gallery of some of our recent projects.

As traffic whizzed by on Route 20, CATS pruned trees we had planted earlier for the Gateway Project.

CATS volunteers continued an ongoing effort to clear English ivy and other invasives from trees at Jackson Burley Middle School.

At our nursery adjacent to the Virginia Department of Forestry’s headquarters, a CATS crew potted more than 200 trees for future sale to the public.

At the Ivy Creek Natural Area, CATS volunteers cared for plantings and improved the view around the Bird-Viewing Area.

A CATS team spruced up fern beds and other plantings at Greenleaf Park.