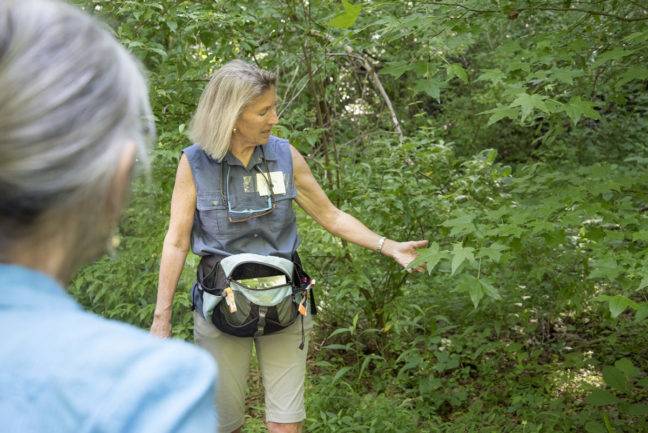 On May 24, summer came early to Pen Park, where Tree Stewards Dana Denbar and Susan Mefford led a tree identification walk along the Fitness Trail. As  temperatures reached toward the 90s, participants learned to identify around a dozen species of native trees, including sugar maple (Acer saccharam), red maple (Acer rubrum), tulip tree (Liriodendron tulipifera), and sycamore (Platanus occidentalis), as well as hackberry (Celtis occidentalis), boxelder (Acer negundo), sassafras (Sassafras albidum), and river birch (Betula nigra). In addition, the walkers learned to appreciate the heat-reducing benefits of trees, not only from the shade of their canopy but also from the evaporative cooling effect of transpiration. Registrations are now being accepted for a repeat of the Pen Park walk, scheduled for 11 a.m. June 15.