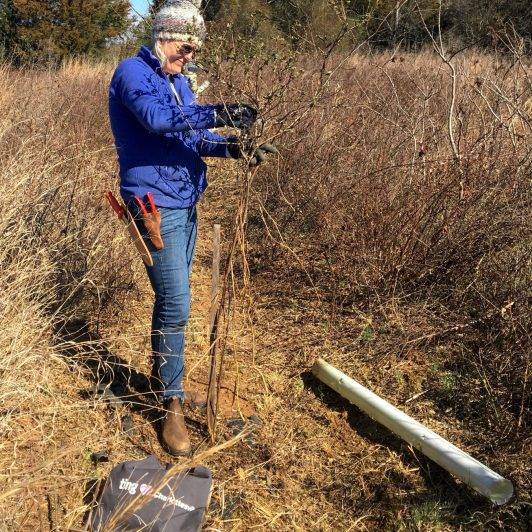 Teams of Tree Stewards were undaunted by chilly morning temperatures as they pursued two highly productive projects in mid-February. On Valentine’s Day, a crew of CATS put their heart into protecting young trees at Pleasant Grove Park in Palmyra. They made extensive repairs to tubes that shield the trees from deer and other browsers, and they cut back encroaching invasive species that threatened the trees and native habitat.

On Saturday, February 22, student volunteers from the APO service organization at U.Va. brought not only themselves but also some of their parents to help six Tree Stewards continue forest restoration efforts in Charlottesville’s Greenleaf Park. Student volunteers from Madison House also took part. Together, they made the adage “many hands make for light work” come true. They repaired the existing trail and mulched an extension to the park’s new bridge. Thanks to Allen Ingling’s expert use of chains, they were also able to move two six-foot logs to the edge of the walkway. In addition, the team removed a heavy infestation of vines and blackberry stumps to make way for the planting of native ferns, scheduled for this spring.